Firstly, we have upgraded the data foundation layer for database scalability and performance improvement. We've also upgraded Angular to its latest version to reduce loading and opening file time.

Secondly, as of February 22nd, 2021, we will be releasing a new Rending Engine to our entire customer base. The New Rendering will not be available for customers who are currently using VB templates.

Lastly, as of February 18th, 2021, we have retired the Volte UI. You can find more information below about this retirement's impact and how it affects you with your Crownpeak configuration.

Crownpeak released a new update to the data foundation layer for DXM.  The changes provide additional scalability and performance improvements to the product.  There are two phases of this deployment; the first phase is updating the underlying libraries completed with the release. The second phase will be leveraging the Aurora RDS framework to expand DXM's future capabilities and provide the potential of horizontal and vertical scale on our data layer foundation with additional benefits provided by the RDS framework. This flexibility provides each customer with the ability to have a greater slice of the DXM database layer's power as demand requires.

DXM v3.48 has been updated with a more recent version of Angular Framework that includes Ahead-of-time compilation.  This means that users can see dramatic improvements in both performance and reliability with the updated libraries.  In some cases, pages will be rendered in half the time due to the new Ivy Compilation and Angular render pipeline.

New Rendering is a new backend engine conversion from VB script code to C# code to render pages and experiences. A new rendering engine also functions as an independent microservice so that any change in the rendering code will not alter other code that uses it. It promises significant improvements to asset preview times and inline editing capabilities.

In 2012, Crownpeak introduced the Volte UI leveraging Silverlight as the technology. In 2015, Microsoft announced the end of Silverlight, and Crownpeak immediately started working on a full replacement for Volte. In 2016, Crownpeak introduced V3, our current Flagship UI, as a fully responsive web-based and version-less user experience built with the latest web technologies, providing richer content management capabilities.

Starting February 18th, 2021, the Volte UI will no longer be available for download. Any previously downloaded client will cease to work and instead display the following message at the login screen. Click on the Let's Go! button to navigate to the V3 UI. 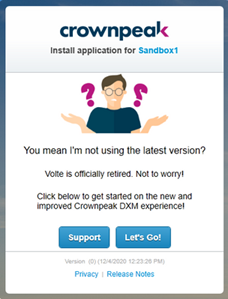 Switch to V3 by entering the below URL (make sure to replace [cms_instance] with your instance name) in your browser's address bar, and log in using your current credentials:

The release provides a new "context" property called "RenderedFromAssetId" that contains the ID for the asset being rendered instead of the component asset. The new property can be accessed from the context variable passed into the "ComponentInput" method as follows. 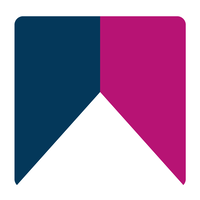